Kevin (my live-in boyfriend at the time) and I were parked parallel next to a cliff in what seemed like an empty piece of land in the Hollywood hills. We were in separate cars. He, in front of me; I was parked directly behind him. The scene below was bustling with the typical energy of big city afternoons lacing up for the night. Street lamps and storefront signs began to open their eyes while the sunburned horizon melted into its haze. The air around us was still. 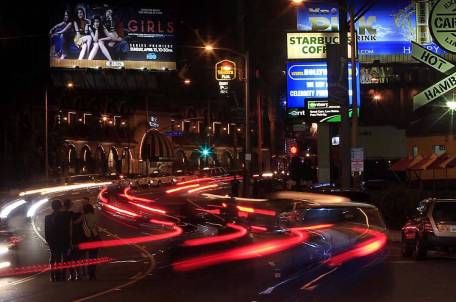 to one another while sitting in our driver’s seats, the windows rolled down. We each had our wallets on our laps and were counting out loud, the money we had saved. We were excited, happy.

I saw her spring onto Kevin first. An excruciatingly obvious drug-induced amped-up 20-something gal armed with a long black cane – complete with a metal tip at the end. The cane looked more like a prop than a weapon but we knew what she was using it for. She slammed the roof of Kevin’s car and pierced through his open window on the driver’s side. Neither of us screamed but were surprised enough to jump a little in our seats. I sat in my car watching every move she made through my front window. She leaned in over Kevin, peered in to his car, then noticed me.

Suddenly I was the one who was nose to nose with this shocker.

I looked deep into her eyes and noticed a pair of thick, black false lashes caked on, like they had been worn for a week. Her dark hair was thick and long and her bangs covered most of her face.

“You are really pretty” I spoke with truth and confidence to this mystery woman. I wanted her to know – I could see through her mask of heavy make-up. I held on to my wallet, almost waiting for her pull it from my grasp.

For some reason, our little friend didn’t take our money but she did wave her cane in our personal space – long enough to remind us that she could have.

After she walked away Kevin and I heard a voice in the distance. “She’s just looking for a place to sleep tonight.” He assured us we were out of harm’s way. He didn’t speak again and we never saw him emerge from the shadows.

Kevin and I remained in our cars but shared a conversation through our smiles. We let the other know we were okay. We still had our wallets and took comfort in knowing we did have a place to sleep, a place to call home.

After closing our bedroom curtains together getting ready for bed, the ground began to rumble. It instantly morphed into a shake and almost as soon as it began, we saw coverage of it on the nightly news.

Another jolt quickly followed. Having already lived in California for years, I was used to earthquakes but they still made me crazy. I looked at Kevin, now sitting on the bed watching the television and could see he was unaffected.

Kevin soon fell asleep. I found myself walking down the hill into the night.

I was dressed in an old stripping costume and made my way through the crowd, under the lights looking for the club.

The tiny hot dog stand was still across the street and the old Vietnamese man who owned it remembered me. The humid air coupled with his musky cologne carried me back to a place that was hauntingly familiar yet comfortable.

I find the building and step inside.

The view in the dressing room reminded me of what any college dorm room would look like, but with much more sequins and lip gloss. I caught a glimpse of myself in the smudged-up mirror behind the door and noticed I was wearing purple Velcro rollers in my hair. The other girls stared at me but I didn’t give a shit.

I had a vague memory of songs I wanted to dance to so I quickly made my way up to the DJ booth before they escaped me. The booth was perched above the stage like a tree house and I needed to step up a ladder to meet the man in charge of the music. A stout black man with a shaved head and dazzling smile greeted me. He wore a navy blue t-shirt, flip-flops and khaki knee-length shorts. He was smoking a cigarette, sitting on a tattered mahogany bar stool with hundreds of CDs surrounding him. I didn’t want to disturb his chaos but wanted at least one song to call my own on stage with the other dancers, so I extended my hand.

After telling him my name I placed my request.

“Do you have Fascination Street by The Cure?” It suddenly occurred to me I was older. Fuck. He may not know who The Cure even was. After a little mind search behind his eyes the DJ nodded and spoke.

“Oh yea, yea, yea, yeeeeaaa, I got that one!” He seemed cool enough to show his appreciation for my taste in old school alternative.

Before I walked on stage I noticed a barrier blocking the entry steps.

“Oh!” My voice turned up a notch in surprise. “This is… new.” I spoke to anyone who was listening and could explain this metal contraption to me. It reminded me of what you walk through when you go to Disneyland.

“Oh here, we have a new way to track how many girls we have a night.” I heard a voice within the thick wall of smoke under the DJ booth at the heels of the stage. He was a pale, lightly bearded man who looked like a cross between David Caruso and Dog The Bounty Hunter.

“Let me take care of this for you.” He placed two quarters in the machine and guided my steps through the carousel. My hips felt the clicking of the stripper counter. It felt like walking through a time machine. I took comfort in knowing Caruso Dog liked what he saw – hair curlers and all. It felt good to think after all these years I still had it.

Assuring him that my special performance was just a one-time thing (“I’m retired, you see…”) I looked back over my shoulder. “Thanks. I won’t be here every night.” He just nodded, took a drag from his cigarette and walked away.

Then I heard it – the groovy introduction to Fascination Street. The base guitar pulsed through my veins like an old lover coming back for more. I forgot how much I loved this song. The base was soon welcomed by the electric guitar and I before I knew it I was off, floating in a sea of melody and movement.

Standing four feet above the crowd, beads of sweat responding to the neon lights, my body was along for the ride. My head swayed in unison with my hips and my eyes closed – so I could breathe each pulse of the notes without distraction. I could feel the crowd watching me. Apathetic to the money or my competition on stage, I continued to float down Fascination Street. Fucking awesome place to ride.

Hearing the DJ’s voice shifted my presence some. I expected to hear the familiar rumble of a baritone voice mixed with radio-type exuberance so I didn’t stop dancing completely. What I didn’t expect was what he called me.

“Ladies and gentlemen, give it up for…Christineeeeeeee.”

Christine? CHRISTINE??? How does he know my real name?

My mind traveled out of myself and right in to the DJ booth and suddenly I realized I introduced myself as Christine. I was so used to having people “Give it up for Stephanieeeeeeee” not “Christineeeeeeeee.” I felt completely off my game. Frozen in shock, I looked out into the audience – then on the stage where I suddenly forgot how to move.

There were two other girls with me: one wore a white leather bikini with shiny rhinestone studs and the other was in head-to-toe black Spandex. The girl in black had heavy bangs and crusty-looking false eye lashes. As soon as I passed her on the runway in the center of the stage I knew she was the same girl who tried to scare Kevin and me up on the hill.

I stayed out of her way.

“She’s just lookin’ for a place to sleep tonight.”

My plan to steer clear backfired because when she noticed I didn’t pay her any attention she immediately pounced me. We were standing next to the pole and the song was coming to a close but still loud enough to fill the silence between us.

“It’s you…” She was trying not to laugh at the sight of my purple Velcro curlers.

“I think you’re really pretty” I spoke assuredly. She didn’t thank me but was happy to hear the compliment again. I knew she didn’t believe me.

The next song on stage was En Vogue’s Giving Him Something He Can Feel. Excellent strut-worthy tune.

Still feeling out-of-place after hearing “Christine” over the loud-speaker, I decided I was ready to bail.

Before the song was over I took off my shoes and made my way down the side steps next to the back-bar. I stood there anticipating the familiar throb of pain that rushed from the balls of my feet through to my heels. No one noticed I got off stage. I took a moment with myself to observe the crowd.

Aside from the new girls and customers, the bar was exactly the same. The room was still dark, filled with cigarette smoke and smelling of stale beer. The music was still played way too loud and the dancers could’ve all used a burger.

Carrying my stilettos across my shoulders, walking with bare feet on the dirty carpet, I couldn’t wait to leave. I looked down to my right thigh to see how much money I collected. Only a couple one-dollar bills lay flat under my garter and I didn’t seem to care. I was going home.

It’s been 20 years since I worked as a stripper. I’ve remembered many dreams from snorting blow and tasting the drip to feeling the sting of a boyfriend’s fist as it clocked me on the cheek.

This is the first time I’ve woken up from a dream feeling enlightened.

I love that I wore curlers on stage and my real name was announced. I’m empowered knowing I wasn’t afraid of the scary girl. The fact that I complimented her twice, through her mask of pain makes me realize – I am coming full circle.

The girl on the hill with the cane, the same girl on stage with the crusty false eyelashes was me. I needed to tell her no matter what, she was beautiful. I woke up this morning knowing that it was true.

Leave a Reply to Tart and Soul Cancel reply