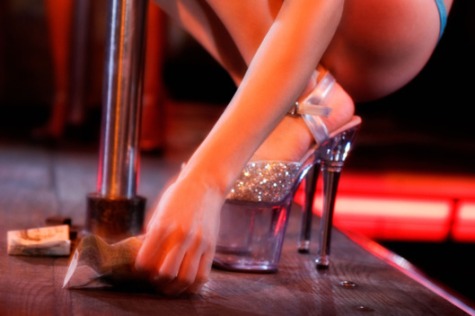 Nobody dreams of becoming a stripper. Little girls aren’t playing with Barbies sharing visions of clear heels. They don’t swing on the monkey bars thinking about the pole, and there certainly aren’t any high school career aptitude tests that prepare us for Champagne Rooms and table dances.

With the ink on my high school diploma barely dry, I made my stage debut in 1987. At just 19, I was a mere hopscotch and skip from Easy Bake Ovens and Lee Press On nails.

Angela and I were hanging in our neighborhood stomping grounds on the beach in Waikiki cultivating our cocoa-buttered tans. Walking back to our towels after a quick dip in the ocean, we sauntered back to our spot in front of the Royal Hawaiian Hotel (famously known as the Pink Palace). Just as we were adjusting our each chairs, not realizing we were clearly showing off our g-strings and freckles, we were approached.

“You ladies want to make an easy hundred!?” Smelling of body oil, this dude was textbook Strip-Club-Promo-Guy.  I was so distracted by his curly-haired mullet waving in the breeze and neon green Speedos that were suffocating his wet, hairy skin gleaming in the Waikiki sun.

“A hundred bucks?” Angela chimed in, dissolving my amusement.

“And all we gotta do is enter a dance contest?” She threw one of her looks. She had the exact persona of a gal who intentionally touches the wall marked “Wet Paint” out of sheer excitement that she was breaking the rules.

“Yea, you gotta dance, but in a bikini and white tank-top. Its a wet t-shirt contest. If you win, it’s an easy hundred bucks.”

A few hours later we made our entrance to the club. Walking through the velvet drapes upon opening the dark-tainted double-doors, I immediately felt like a grown-up.

The room was dark and smelled of stale beer. Traces of sand decorated the floor and Jon Bon Jovi’s ‘You Give Love a Bad Name’ serenaded my entrance. Angela arrived before I did and was already working the room for voters. The contest winner was chosen based on audience applause, so the girls were all over it. I was too scared to hobnob with the young military boys so I ordered a Bud Light and found the dressing room past the tiny stage in the back.

“You here for the contest?” A tall black woman with dreadlocks and stoned eyes greeted me.

“Uh huh.” I pushed out the words in-between excited breaths.

“Well okay honey, put your name down. You got a t-shirt?” She handed me a clipboard. Her marathon-long pink nails mesmerized me.

“Yea.” I nodded, pulling out my Hanes men’s tank top to prove my preparedness. She smiled, directing me to an empty locker while greeting another girl who walked in after me.

Before I knew it my stage name was called.

“Ladies and Gentlemen, coming to the stage we have the sensational Stephanieeeeeee.” I chose my middle name because it was easy to remember.

Cloaked in a beer buzz and adrenaline, I worked my shit on stage. My Wife Beater tank was soaked and you could see straight through to my b-cups. No shame, just showmanship.

On stage I was flawless. I worked my Tawny Kitaen hair and pretended to have porcelain skin. I was worlds apart from how I felt off stage; the scar-faced Freddy Kruger girl they bullied in school. On stage I was home.

The audience loved it too and, to my surprise, I won the contest. I left the club that night with a crisp Benjamin and a new job.

Working at the club was a little different than shaking my moneymaker for a contest. Like all the girls I had to double as a waitress. There was a small fry-cook stand next to the back stage where you could feast on greasy fries and chicken wings while you watched the girls strut their stuff.

Because food was involved, wearing pantyhose on the floor was required by law. It took a certain skill to master the assembly of wearing sheer hose underneath a g-string. I rolled each side down, belly to butt crack, then fastened the nylon to the tiny patches of Lycra/Spandex covering my business.

So there I was – loving my new career as a showgirl on stage: Fabulous Stephanie. Perfect everything. Hip popping, Aqua-netted head rolling, kick ass money making Steph. I was having a blast. Bending over, taking a tip, head up, and moving on. The customers seemed like they were flocking to me, staring at my ass and smiling.

After Mötley Crüe sang their last note I saw Angela upside down through my legs. She waved my attention and I walked off stage to meet her in the dressing room.

“Take a look.” Angela placed my back to the floor length mirror and made me bend over, looking at my ass through my legs. Holy shit. Fuck. I was blown away. I never shaved or groomed my pubic hair. Ever. Add to that fact, the visual of my pantyhose smashed up to my g-string. It was like a scene from Alien – only hairier. A bushel of pubic hair, flattened out like a dead spider under my pantyhose. It looked like my privates were robbing a bank.

“Oh my God.” I couldn’t believe I was on stage bending over with my Bank Robber Business for the world to see. And I was smiling, asking for money! And I thought the customers were smiling because I was hot. I needed more than a razor. I needed a cocktail.

I took the rest of the night off – sneaking out the back exit so no one would see me.

After running home in shame, I turned on the TV and ran a hot bath. I grabbed a pair of scissors and a hand mirror and started lady-scaping immediately. In the background I heard Sigourney Weaver speaking. I stood up, scissors in hand and walked in to the bedroom. There she was. Ellen Ripley in all her bald glory.

I took it as a personal omen that Aliens was airing and decided to pay homage to my little freak show on stage by shaving myself completely.

13 thoughts on “It’s a Jungle Down There”