If you’re new to my page, let me get you up to speed. I’m recovering hot mess who, from 1987 to 1996 used to grab her ankles naked on stripper stages in Waikiki, where I grew up. I survived some pretty major drama as a kid and am writing a book about how it all came together – after everything fell apart.

My main squeeze was blow (that’s cocaine, my innocent darlings) but I had a torrid affair with Ecstasy (it’s called “Molly” now, or so I’ve heard) after our introduction on my 21st birthday. For a solid five years, I was in love with both. Booze was always my back-burner bitch, and every now and then acid and shrooms (magic mushrooms) crashed the party. But Cocaine – from the moment I snorted my first line at fourteen – she was The One. It was a love affair with confidence. And after a near fatal burn out at age 28, my cocaine affair continued for a handful of years. Fickle little bitch.

But this isn’t a story of my why. This is about the HOW.

How can a freshman in high school possibly get her hands on drugs? Trust me. It wasn’t hard. At least, it wasn’t in the 80s. But I gotta say, with the current drugs of choice (Vicodin, Norco and Oxy, oh my!) coming straight from mom and dad’s medicine cabinet now, I can’t imagine accessibility being an issue.

But how could a parent not know?

I can’t speak for all parents – and not being one myself –  all I will say is that addicts are master manipulators. Parents don’t see what they don’t want to believe. It’s the Holy Grail of addiction: we know you think you know we are ‘good kids’, and with every turn of your blind eye, we delve deeper down our rabbit hole of shame and denial, loving every tumultuous turn.

Of course, not every kid who pops a pill, smokes a joint, slams a beer or even tries blow is an addict. But so what? Isn’t even one kid who uses, too many? And let’s get real – there are tons of kids getting high. Not buying it? Here’s a free sample of some raw facts:

“Recent research by the National Center on Addiction and Substance Abuse reveals that drug use among teens has reached epidemic levels: a staggering ONE out of every THREE teenagers meets the medical criteria for addiction.” Kristen Johnston – SLAM

That little nugget of Scary is a direct quote from SLAM (Sobriety, Learning and Motivation), an organization actress and author Kristen Johnston started years ago, which assists New York City’s youth in recovery.

The deeper I dig into my own tale, every chapter is unfolding within the safety of my words as I write my personal story. I’m realizing – what a gift Kristen and SLAM is to so many of us. I am proud to know her as a friend (and her unwavering support with my book has been astounding, selfless and will never be forgotten – I just need to finish the thing!) Kristen is the real deal. I haven’t been connected with her in a while – but I will always remember her calling me out on my shit. And, isn’t that what friends are for?

So back to her dream of SLAM becoming a reality. Can you imagine if anything like this were around when we were kids? I can’t help but wonder how different my own path would have been if I had this type of support system in High School, of all places.

But I have no regrets. We are all products of our choices and as hard as it is to own them, we are braver, stronger and hopefully a helluva lot wiser having survived them.

Regret is an allergy – especially for addicts. If we even allow ourselves a taste – we break out in shame. But there’s something we love about it; as hard as it is to understand (for those who aren’t born with this disease of addiction), the shame feels like home. There’s comfort in the chaos. It’s not healthy, but it’s true – and totally treatable.

Life is hard enough without having to disinfect our past. So we all do our best to move forward, navigating the land mines of blame.

But who do we blame?

Every addict has their own story, so there’s no way we can blanket the world with one giant finger-pointing party. The bottom line is, once your child is in trouble in the immediate sense, it really doesn’t matter how or why they got there (you’ll have plenty of time to figure that out during Family Week). The only thing that matters is that they are getting help.

That’s a tough pill to swallow (pardon the pun). But parents, please – I know you can let those damaging judgements and punishments go, once you learn to truly see your your child through a different lens. Yes, they need to take responsibility for their actions – but truly, they are merely a vehicle in this non-discrimnative disease of addiction.

The clearer their minds – the cleaner the path.

The hooks of addiction are sharp and unmerciful, and they don’t need a reason to puncture, they just need the skin. And when it comes to our children, SLAM (and every sober high school in the country) are the most valuable weapons of armor we have.

I’m not a therapist, interventionist, doctor or specialist – but what I can tell you is that I’ve been there. Teenage addiction (and depression) is real.

Here’s a poem I wrote high on cocaine in 1983. I was fifteen. While my classmates were playing Pac-Man at the arcade and roller skating up the street, I was isolating in my room, chugging mom’s Chablis, listening to The Smiths, snorting lines of blow.

Four years later I started my stripping career in Waikiki; 20 miles from my middle-class neighborhood.

Why did I save this poem (typed on one of those things that we used before computers were invented)?

I have my theories – but you can decide for yourself. 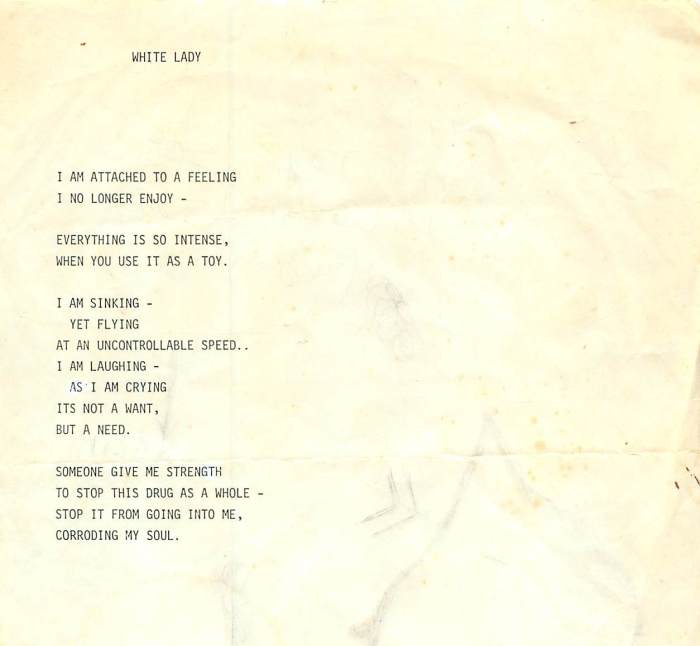 If you’re wondering whether your teen (or anyone you know) is an addict, TheFix.com is a great source of information. They are also on Facebook.

To read Kristen’s personal story, pick up her book GUTS (I dare you not to laugh through tears). And if you dig my writing and wanna know how we connected, it’s partly because of my review. – She called me out on it, after I tweeted to her I was working on it.