Customers of strip clubs are like used cars in auto malls – there’s always a variety of inventory, and each wishes you would ride them.

This type of customer was a classic example of a wolf in sheep’s clothing. On second thought, they were more like boys in men’s clothing. At first glance, I’d think he’s young and clean-cut, so I would rest easy working my way up to them on the stage. Once positioned and face-to-face with the darlin’ scholars, I’d smile, dance a little, and lift my garter for them to place a tip. More often than not, College Guy smiled, kept staring at my ta-tas, but made no attempt to fetch their wallet. At this moment any stripper realizes, College Guy is a euphemism for Poor Guy – not to be confused with Cheap Guy, who is much lower on the stripper-tolerant scale.

If College Guy really liked you, (and you had patience) you could get a dollar bill from him after about four songs (that’s about 20 minutes, people). It was a lot of work for a buck, but you had to respect a guy for squeezing in mid-terms with strip-bars, not to mention fitting in a stripper tip on a Raman noodle budget.

Steadfastly calm and rarely perched directly under the lights on the stage, Drug Dealer Dude was a subtle and loyal fixture within the walls of stripper debauchery. Although neatly tucked in the shadows, spotting them in the club was never hard. Drug Dealer Dudes were usually surrounded by a bevy of beauties donning not much more than a g-string and smile. Count me in as one of the gals in line to schmooze for some mind-altering merchandise.

In 1990’s Waikiki, the hot substances in the skin trade were cocaine and MDMA (Methylenedioxymethamphetamine), commonly known as Ecstasy, “E” or “X” (now, called “Molly”). Occasionally you’d smell pot back stage, but the real action was in pills and powder.

Always the consummate salesmen, Drug Dealer Dudes were a blast to hang out with, but not the greatest customers. Unless they had a crush on one of the girls, or were lost in a girlfriend-fantasy (some gals banged them for free drugs), Drug Dealer Dudes never really tipped.

Here’s a group who always made me feel like I was on the witness stand in the proverbial Justifying My Life trial. It’s safe to assume dancing for wedding rings wasn’t favorite pastime. I was constantly reminded I was a cliché. I am not sure if it’s because they had kids of their own and they felt sorry for me, but married men always questioned my career choice. Always. 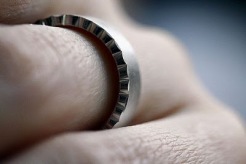 “What does your dad think about you doing this?”

“Okay, then how does your mother feel about you stripping?”

Without missing a beat, I’d reach over to his left hand, gaze into his eyes, as my fingers touched his ring.

“I don’t know…how does your wife feel about being at a strip bar?”

I usually received that uncomfortable touché look, and the subject was immediately dropped.

For many reasons, Hawaii is one of the most popular tourist destinations for Japanese travelers, and strip bars were often on the agenda.

Tour buses would deliver flocks of these dudes along with their mistresses. These types of customers were the hardest to dance for (unless you liked cigarette smoke blown in your crotch). I don’t know if it’s a power-trip subservient thing, but you really had you work for your tips with these guys. Commands of “bend over” and “open! open!” were common (talk about working for your money).

Most of the tour groups came in big numbers, and with their mistresses at their side, it was common for a full stage of customers to sit and watch you perform.

Positioned quietly next to their men, the petite mistresses would sit and smile, looking misplaced and bored. In giving them attention, I realized I could literally double my money if I simply made the ladies feel present.

Stripping for the Japanese Tourists Mistresses was different from tolerating their dudes. I actually preferred it. Instead of being provocative (that made them uneasy), I created a little game. I took one of the bills (piled in the stack in front of them), folded it, and placed it in their hands. I then took my breasts and scooped the bill up with my cleavage right from their hands. The girls giggled, covering their mouths – but they loved it. I then taught each mistress how to “high five” with their hands and made a point to clap and cheer each time they tipped me. Before long, those gals were having a blast, waving their dollars to play the booby-tipping-high-five game.

Every now and then a couple would come in the bar and after some cocktails, venture up to the stage for a closer look. One of the most popular fantasies of straight dudes is to watch two hot chicks bump and grind. I always had fun playing the part. I felt comfortable, respected and adored when dancing for a woman and her man.

Women are competitive by nature, so it’s no surprise that I considered their tips to be one of the highest compliments to receive. I always wished more couples came in the club. I think it’s a rockin’ fantasy to play out, if both parties are respectful of one another’s boundaries.

Oahu is a military stomping ground, with every service base and reserve station on the island

within a fifty mile radius. On any given day, you’d find your share of service men spending their hard-earned cash at the strip bars. Payday for them was always the 1st and 15th of every month, so you knew to work a double shift on those days if you wanted to make bank.

Outside of some isolated drunken nights including fist fights and police arrests (usually when they were in large groups), my experience with Military Boys in the clubs was one of gratitude. They drank heavily and tipped even heavier, if they took a fancy to you. You just had to be careful not to break their young, starry-eyed hearts.

4 thoughts on “The Customer is Always Trite”