It’s been weeks since the docs told me about my little bubble brain. They didn’t use those exact words, but I prefer a sugary colloquialism over the actual medical diagnosis: “Intracranial Aneurysm.”

What started out as a personal quest to get to the bottom of my twelve-day migraine (landing me in the ER twice) ended up being the very beginning of a new adventure: discovering, learning about and living with this ticking time bomb. 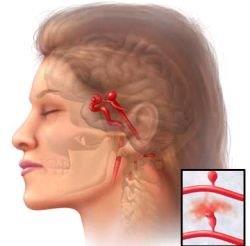 Truth? I thought a brain aneurysm was a stroke. But after a crash course with a couple of top-notch neurosurgeons, I now know better. I learned that an aneurysm of the brain is a weakened area of a blood vessel. If it ruptures, this causes bleeding in the brain – which is called hemorrhagic stroke. Roughly fifty percent of people will die immediately, the other half, brain-damaged.

If. Rupture. Stroke. And, scene.

If. Those two letters joined at the hip have been a storm cloud hovering above me since my diagnosis. It’s one of those words that, when on automatic replay is guaranteed to heighten anxiety, perpetuate insomnia and toss you around in a cyclone of worry and fear.

Everybody has their Ifs. If they finished college, saved more money, accepted a job offer, stayed in touch more…the list is endless.

The only If in my world lately relates to my old stripper-self twenty years ago.

As most forty-something’s do, I reflect on my irresponsible past whenever my present self is faced with something that could have been avoided. It wasn’t until incriminating photos surfaced from old friends on Facebook that I realized how much I used to smoke (as a bladder cancer survivor at 36, the weight of regret when seeing my cocky ass holding a martini in one hand and a cigarette in the other is suffocating).

My memory of the nine years I worked as a stripper is a kaleidoscope of VIP rooms and debauchery, which seems cool. But stare long enough at the shine, and reality will find a way to blind you.

I’ve been assured by the professionals that the string of cocaine and alcohol binges in my twenties is not the cause of my new-found brain aneurysm. They tell me in fact, that if I had this little fucker back then, I wouldn’t even be here – another casualty of addiction.

Still, I wonder. If The Universe is trying to get my attention, she has. Her sense of humor isn’t lost on me, either.

As someone who has struggled with depression I know well, the cinderblocks of despair and hopelessness. A few years back, in the thick of one particularly dark spell, I was paralyzed and obsessed with the fantasy of taking my life. Google was my accomplice; every hyperlink, another turn down the rabbit hole of options in which to do so.

This brain aneurysm scares the shit out of me. The Ifs are immeasurable. If it ruptures. If I need brain surgery. If I die. I’m living in a constant reminder to breathe, and try to let go of things that are out of my control.

It’s an odd and embarrassing feeling to admit fantasies of wanting to die. But if this aneurysm is teaching me anything, it’s that I can honestly say, I’m not ready.

28 thoughts on “Shit just got real: my brain aneurysm”