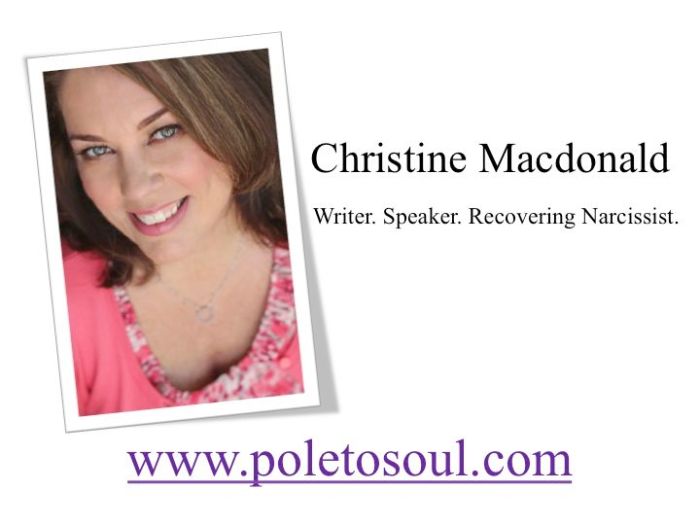 From working the pole – to baring her soul. A bit corny, but that’s Christine. She’s also an abuse and cancer survivor, recovering drug addict and ex-stripper (1989-1996).

Through her writing she uses her voice, a unique blend of cutting truth and self-deprecating humor to inspire others to release their shame and tell their story.
.

At age 13 Macdonald was diagnosed with Acne Conglobata, a very rare and severe skin disease that left over 80% of her face severely scarred. The trauma she endured subsequently led to her working as a topless dancer in 1987 at the age of 19. She is noted as saying the first time she felt beautiful is when she was on stage. By the time she was 21, Christine worked as a nude burlesque dancer and was highly addicted to cocaine and the psychoactive drug MDMA (“Molly”, “Ecstasy”).
.
She is very public about her struggles with mental illness (Clinical Depression, PTSD, Histrionic) which she believes are partially a result of her heavy drug use in her twenties, along with it being hereditary.
.
Her chapter, ‘Sunset Strip’, about her final night on stage is published in Larry Smith’s The Moment: Wild, Poignant, Life-Changing Stories from 125 Writers and Artists Famous & Obscure. She is currently hard at work completing her memoir.
.
It is Christine’s passion and vision to speak to young women with self-esteem issues. Rather than judge them for their choices, help them find value in embracing what they consider to be their flaws.
.

Christine brings her love of the coast to California where she has lived since moving off the island of O’ahu (her hometown) in 1996.

When she’s not writing, attending indie films or local concerts, you can find her at the dog beaches or parks in Long Beach, California – where she has lived with her three-legged rescue dog, Stella since 2014.

Her published work can be found on Amazon, as well as SMITH Magazine, Guide to Literary Agents, Scribd, Salon, and Anaheim Examiner.

Interviews include: National Association of Memoir Writers (Memoir Writer of the Month), Dave Ursillo (Renegade Spotlight), KirstyTV, LA Talk Radio and Power Women Magazine.
.
As noted in her guest column for Chuck Sambuchino’s Guide to Literary Agents website, Christine is an avid supporter of equal rights. She is a member of celebrity photographer Adam Bouska and partner Jeff Parshley’s NOH8 Campaign and founded Another way to say it Greetings, a greeting card passion project that caters to her friends of the LGBT community.
.
.
~ ~ ~
.
.
For hilarious 80’s photos and more, please visit Christine’s website: www.poletosoul.com.